In partnership with Fast Forward Futures, the Berry Good Food Foundation awarded scholarships to outstanding farmers and fishermen for the third year in a row, at the San Diego Bay Wine + Food Festival in November 2018. A panel of judges reviewed the applications, and awards of $1,000 each were presented to young San Diegan farmers Fisher, Sawyer and Finn Phillips, aka the Fallbrook Farm Boys; to farmer Paige Palcic; and to fisherman Sai Fukushima. 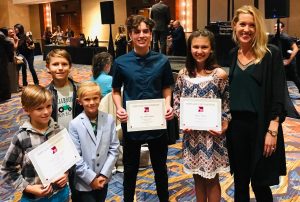 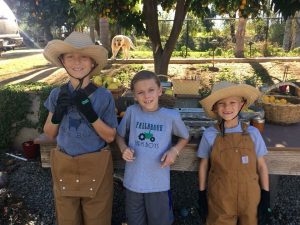 Fisher, Sawyer and Finn live on Gracey Lane Farm in Fallbrook where they help their parents Jen and Jason raise chickens and rabbits. Once a month they do a “Kid-Only” farm pop-up and invite other local farm kids to sell their produce “to anyone who is nice enough to come to our pop-up!”

The pop-up is something Jen and Jason have been doing with the boys and their friends to learn how to use what they produce on their small farm, earn their own money, and work collaboratively with their friends who also live on local farms. They all learn that what they grow on their farm can be a small business, and they are in charge of the stand, harvesting and selling the produce, and interacting with customers. But mostly they have fun together as family and friends and connect with the community. 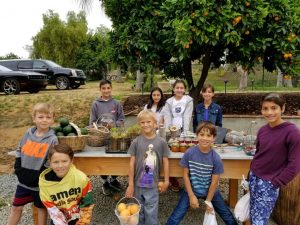 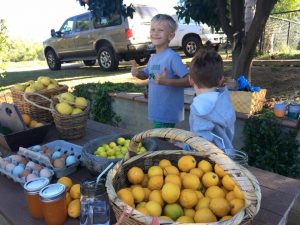 The boys hope to get a few goats and sheep to add to the farm next year, and plan to use the scholarship money to purchase food, materials and supplies to build a good shelter for the animals. The structure may also have a simple farm stand connected to it, so the boys would have a covered area to sell their produce. They are also thinking of hosting some educational classes for the other kids in their community, such as caring for farm animals. 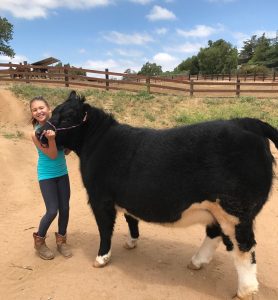 Paige Palcic is in 7th grade at Classical Academy Middle School in Escondido and has been active in 4-H for the past 4 years. She has raised beef, swine, goats, and turkeys, and states, “I learn something new every year on what to do differently to try to do better for the next year.” Paige plans on becoming a large animal veterinarian: “I want to work with animals forever if I can.”

Her first year in 4-H she was awarded light weight champion for her heifer project, the next year mid weight champion, and last year she raised a steer named Tug: “Because I have to do a lot of tugging when I work with him.” She was awarded heavy weight champion and 4-H overall champion for her steer project. Paige’s brother will raise a steer this year as well, his second year raising a steer and a pig. According to Paige, “He loves the beef project more than anything. He said he would give up baseball to raise a steer this year, and we work together as a team. Our steers love each other like brothers, even though they came from two totally different farms.” 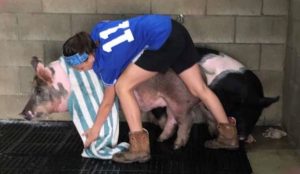 Paige raised enough money in 4-H last year to buy a bred gilt pig (a female pig that has been bred) that is due to farrow mid-December. She will use her scholarship money to pay for any vet bills she might incur and feed for the piglets. Pigs are her favorite animal “because they are sweet, and you can almost play with them like a dog.” She and her brother are looking forward to having a litter of pigs and will each keep a piglet, will give one piglet to a 4-H’er in need of financial assistance, and another one to a Valley Center Future Farmers of America (FFA) student in need of financial assistance. “I am so excited to share this with all the kids in my 4-H group and to experience having our own babies here. This is my way of being able to give back to our community and get back into the family projects as I am getting older.” 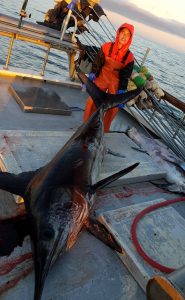 Sai Fukushima is a 16-year-old fisherman from San Diego. He and his two younger brothers have grown up in a fishing family and have been on the water since they could walk.

For the past three summers, Sai has worked aboard the family boat, the F/V Three Boys, learning the commercial fishing trade. He and his father, Kelly, fish swordfish, crab, rockfish, halibut, seabass, tuna and yellowtail off the Southern California coast. He is learning all the skills needed to pursue a successful career in the fishing industry, including marketing of the catch which he sells to the public weekly at Tuna Harbor Dockside Market on Saturdays. At the open-air Dockside Market, Sai has an opportunity to educate people about the local fishing community and the benefits of fresh, healthy and responsibly harvested seafood. 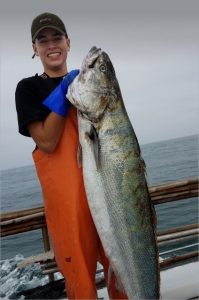 The scholarship award will help Sai to acquire the materials and education he needs to help master his craft. He plans to use the funds for purchasing fishing permits and to help pay for schooling for his captain’s license.

To read about BGFF’s previous year’s scholarship awards click on 2017 and 2016.