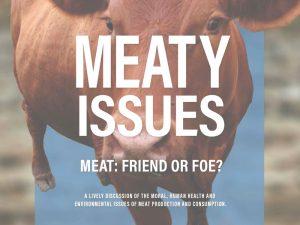 The second of four multidisciplinary panel discussions presented this year by the BGFF, “Meaty Issues, Meat: Friend or Foe?” took place on May 17th at the Scripps Research Institute Auditorium. Panelists (listed in detail below) included vegans, omnivores, researchers, a cardiologist, a nutritionist, and a rancher. The discussion was divided into four sections: environment, animal welfare, human health, and technology.

One of the major takeaways of the evening was that the typical American diet is plagued by an overconsumption of meat. We need to be more conscious of how much we are consuming, and from where it is being sourced. According to the Harvard School of Public Heath, our per capita daily consumption is twice (12 ounces) the daily recommended allowance (6 ounces). By 2050, the world’s population will grow to nine billion and the demand for meat will have doubled from that in 2000.

So how can we afford to eat what is considered a luxury item for so many around the world on a daily basis? In short, because we’ve gotten used to having cheap readily-available meat.

“Our food is cheap because it’s heavily subsidized, but it’s not healthy since it’s so processed. We’re subsidizing the wrong food,” said moderator and BGFF founder Michelle Lerach.

“We can’t keep thinking of food as an inexpensive and unimportant thing in the background,” added Aaron Gross, founder and CEO of Farm Forward.

“We should eat half as much meat as we currently do, spend twice as much for it, and buy it from ranchers who are producing it in a responsible manner,” said David Bronner, CEO of Dr. Bronner’s.

So what is wrong with the majority of meat that we’re consuming? One of the main problems facing large-scale feedlots is the abuse of antibiotics. Conventional ranchers maintain that the pharmaceuticals “keep livestock healthy” in a Concentrated Animal Feeding Operation, or CAFO—in which animals are confined for more than 45 days in an area that does not produce vegetation. In 2011, almost 30 million pounds of antibiotics were sold for use in meat and poultry production, while just under eight million were sold to treat human ailments.

Vegetarians may falsely believe they are free from ingesting antibiotics by not eating meat, but the fecal matter from treated cows are often used to fertilize vegetable crops and can transfer to humans through produce.

Why is this a problem for consumers? Because antibiotics kill beneficial bacteria and upset the diverse microbial balance in our guts that keeps us healthy. Antibiotic resistance has been linked to obesity and autoimmune diseases, and causes more than 23,000 deaths per year in the United States. Perhaps most concerning, bacteria is increasingly becoming resistant to antibiotics, leading to chronic infections that are difficult to treat. Just days ago, it was reported that a woman in Pennsylvania is carrying a “bacteria superbug” that resists antibiotics of the last resort, and the Centers for Disease Control predicts we’ll see more cases of it.

The production of meat on this scale also takes a toll on our natural resources. “California’s agriculture consumes 25 percent of California’s water,” points out Kari Hamerschlag, Senior Program Manager with Friends of the Earth‘s food and technology program. “That’s 7,000 glasses of water to produce one steak.”

“Beef creates 29 times more greenhouse gas than lentils,” continued Hamerschlag. While cows are often blamed for emitting high levels of methane into the environment, it’s actually lamb that is the worst offender (with cattle a close second). Looking at the chart below, one can certainly understand why some members of the panel argue for pursuing a plant-based diet; or at the very least, a diet that cuts down on the amount of meat we are currently eating on average. 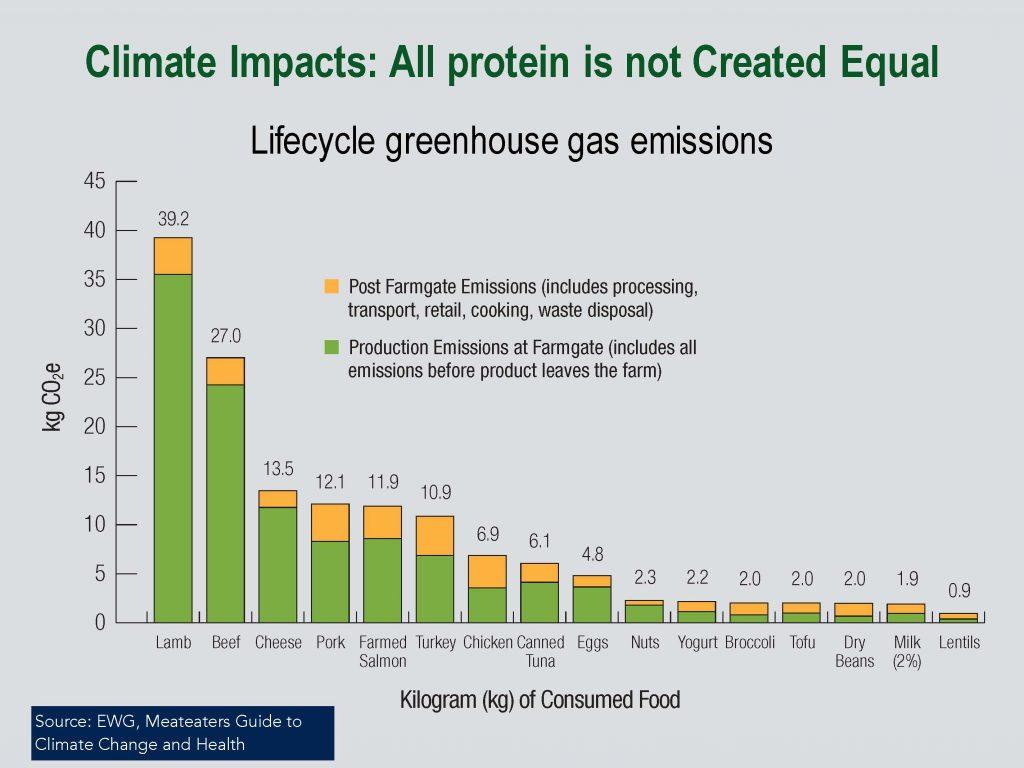 While nutritionist Corinne Bush lauded the nutritional benefits of grass-fed beef versus conventionally raised beef, Food Choice and Sustainability author Dr. Richard Oppenlander contended that grass-fed cows actually produce about 50 percent more methane gas than grain-fed ones and use more water and land. Some panelists disagreed, arguing that it’s a problem to look at the issue based on one metric, methane emissions, instead of the whole picture. “Looking at the issue from every other front—animal welfare, human health, and even carbon sequestration through the use of regenerative agriculture on our grasslands—pasture-raised meat outperforms CAFO meat,” responded Lerach.

Oppenlander continued to be vocal about the urgency of the situation for our environment. “There are recognized tipping points, or planetary boundaries, and we have already surpassed four or five of them,” he said. “We’re on a timeline here, and the magnitude of the problem deserves a response.” 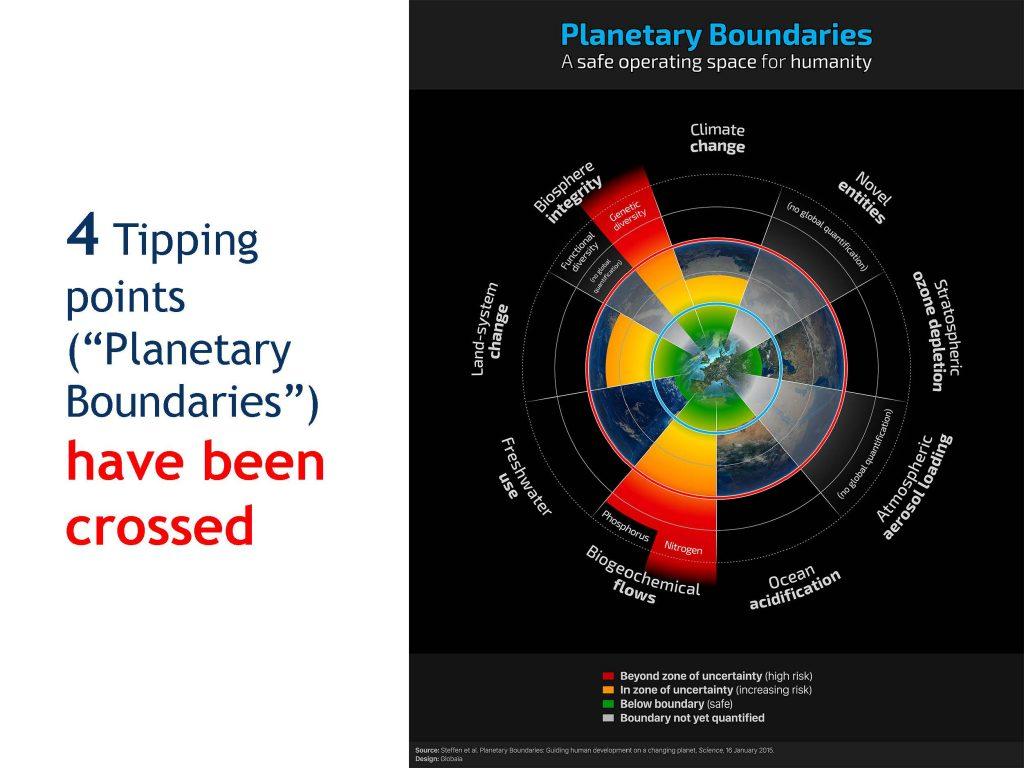 Thankfully, some positive developments are on the horizon, and we as consumers can make a difference by demanding a better product.

“Speaking on the topic for the last 40 years,” continued Oppenlander, “I’ve never seen so much positive change as I have in the last 12 to 24 months, namely around sustainability.”

Hamerschlag hammered the importance of community involvement with big brands. “McDonald’s, Subway, Papa John’s, and In-N-Out have all announced that they are taking steps to no longer source meat treated with antibiotics. All of you have a role to play. Let restaurants know you want antibiotic-free meat on their social media, especially fast food restaurants.”

Progress may even come in the form of lab-grown meat. Uma Valeti, CEO of Memphis Meats, is currently growing pork, beef, and chicken from meat cells that don’t require the slaughtering of animals. The technique is still in its early stages, and will have to withstand safety testing and cultural adjustment by consumers, but Valeti remained positive, saying, “It’s the same delicious meat we’re used to, but it’s safer for all of us. Plus, I think we can all agree that there’s very little that’s natural about the animals we’re eating right now.”

One of the other major sentiments of the evening was that we need to come together as concerned consumers and push for best practices. “When we’re divided based on whether we consume meat or not, the agricultural complex wins,” said Lerach, who is a vegan. “Some vegans criticize me for this, but, whatever your dietary preference, we need to be united, and advocate for farming that is the most humane and the most regenerative.” 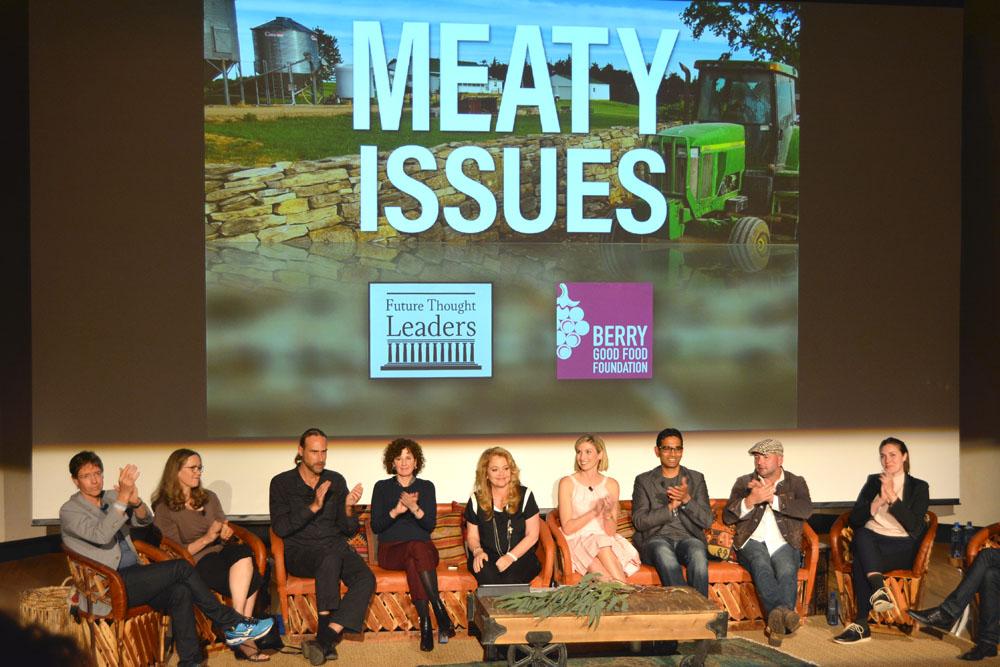